In ‘NO MANS LAND’ we are forced to question our identity, to ask ourselves where we stand, where we come from, and where we will go. Sculptures scatter the landscape like relics hinting at the collapse of a past civilisation, or objects of an uncertain present, as if placed in a time capsule and left as a warning of how intolerance and fear can split a society in half.

Bill Daggs and Simona Pesce are two artists whose life experiences enable them to be open to diverse cultures. Bill Daggs, who was born in North West London, has been surrounded by different communities all his life while Simona Pesce, was born in Italy where she studied, moved to Germany at a young age and has lived in London for the past 20 years.

With these backgrounds and their sense of pride in London’s culturally rich communities Bill Daggs and Simona Pesce are preoccupied with the outcome of the 23rd June 2016 EU Referendum and the migration crisis of 2015. These two events have forced the artists to question the place they call home and where they stand in a society that they have described as a destructive social wreckage. With these events in mind ‘No Man’s Land’ was conceived not only as an exhibition but also a beginning of a collective which aims to invite other artists to discuss the situation of our life now.

Terence Wilde, British artist and pottery instructor within the Occupational Therapy Department at The Bethlem Royal Hospital has been invited to be part of the exhibition. His approach to the emotional wasteland and social wreckage reflects experience of loss and rejection felt by the other
two artists

Bill Daggs’ work contains multiple references to distant cultures, remote in time and space from his own upbringing in 1990‘s London. By mixing imagery from these cultures with reference to his own past he suggests that culture and community can endure despite the hardships and challenges placed on them. There is a suggestion that these sculptures may be archaeological
relics that have survived thousands of years in spite of their humble materials. Somehow, they have withstood the advancements of technology and the perils of erosion and handling to survive as informative objects. The mythology in his work is playful and reminiscent of childhood games,
influenced by superheroes and comic book worlds and remembers the masks we may have worn ourselves while lost in our own imaginations.

In the last few years Simona Pesce’s work has developed ideas through sculpture and installation, but she also makes paintings and prints. She uses a range of traditional materials such as plaster, bronze and steel, as well as natural, found and recycled materials such as soil, wood, leaves and wool. For Simona, process is as important as the outcome of the work because the process informs the work. Influences of Arte Povera are evident in her choice of material and minimalistic approach towards the work. Her work offers the chance to question and reflect on the bizarre duality of human solidarity and hatred, as well as the legacy that modern society is leaving to future generations.

Terence Wilde produces detailed pen drawings using black and white as his main palette and is a prolific potter. Often the drawings relate to his radical ceramics. The illustrations and ceramic objects are responses to different situations that he considers to be his ‘real’ life’s work as an artist. He uses experiences from different time periods and places which are organized in such a way to enable him to express his views. His visual language conveys a sense of history and how life is now. 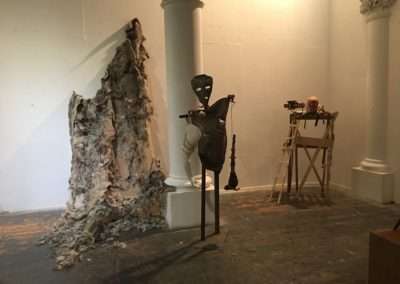 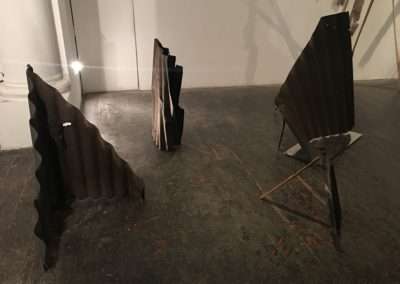 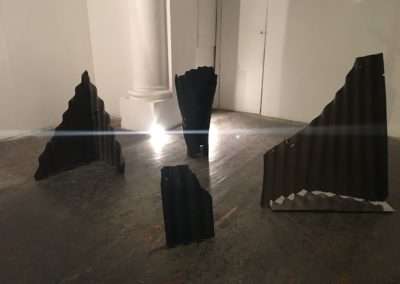